Whatever You Do, Please Don’t Try DIY Teeth Straightening

Wondering how to straighten your teeth by yourself? The short answer: don’t. 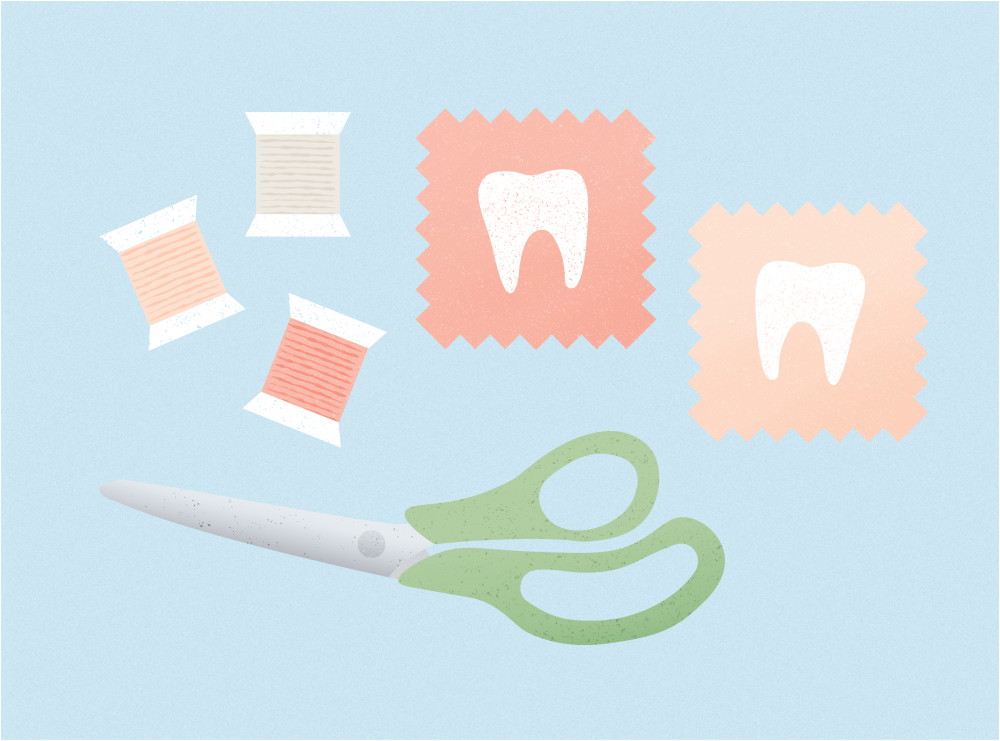 In a 2016 YouTube video called “How I Closed My Gap,” a musician named Brandon Andre tells his followers how to straighten their own smile with rubber bands — and explains why they shouldn’t pay any attention to naysaying experts.

Andre is right — if you try DIY teeth straightening, you’ll definitely experience change. But it might not be the change you were looking for.

For many people, straighter teeth seem like a golden ticket. They can influence first impressions, help job seekers feel more confident in interviews, and even play a role in a person’s romantic success. But with conventional metal braces and in-office treatment with clear aligners far beyond many people’s price range, it’s no wonder that some take matters into their own hands, trying to straighten their teeth out for just a few dollars — the cost of rubber bands, Goody hair elastics, or orthodontic elastics.

Dr. Dan Sletten, an orthodontist based in Minnesota, has witnessed the consequences of DIY teeth straightening in his own practice.

“The most severe issues were patients that tried to close space between front teeth using a small orthodontic elastic,” he tells The Impression. “The elastic band migrates apically [toward the roots of the teeth], and results in gum recession and bone loss around those teeth.”

Studies have shown that when elastics work their way towards the root of the tooth, they can migrate subgingivally — meaning, slip under the gums — and cause pain, inflammation, displacement and loss of teeth, and periodontitis. (Periodontitis is an advanced form of gingivitis that’s been linked to heart disease.) And once a band slides into the soft tissue of the gums, it can be extremely difficult to retrieve.

Fixing these problems can be very costly, Dr. Sletten adds, and oftentimes, the lost gum tissue can’t be recovered.

For example, a man named David Campbell told ABC News that decades ago, at his childhood dentist’s advice, he attempted to close a gap in his top front teeth by looping rubber bands around them at night. In the mornings, he said, the rubber bands would be gone. But Campbell wasn’t swallowing the bands overnight: It turns out that they’d embedded themselves deep in his gums, strangling his teeth at the roots. Ultimately, he lost his two front teeth and spent seven years, plus tens of thousands of dollars, repairing the damage he’d caused.

Campbell’s case isn’t nearly as unusual as one would hope. In 2017, the American Association of Orthodontists issued a press release announcing an uptick in the number of patients attempting DIY orthodontics, with close to 13% of AAO members reporting having seen patients who had tried to correct their smiles on their own. But the trend was already widespread enough by 2015 that the AAO felt compelled to produce a public service announcement to caution against DIY teeth straightening.

"Trying to close a gap or straighten your teeth yourself can increase the risk of infection and serious damage to your teeth and gums, including tooth loss," the PSA warns.

Of course, the general principle behind the various DIY methods that people have tried long predates the internet; as far back as 1728, Pierre Fauchard, the “father of modern dentistry,” proposed using a silk thread to draw gap teeth together. But the AAO largely attributes the trend to an explosion in DIY teeth straightening YouTube videos, and it’s not hard to see why. Rubber bands are just the start, as hopefuls can find video after video detailing how to use string, floss, hair ties, paper clips, moldable plastic, clay, and other items to straighten teeth.

Unsurprisingly, combining DIY and dentistry can lead to some truly horrifying stuff. And experts say that attempts at implementing these oral care “hacks” often lead to people spending serious time and money with a professional — the very thing they were trying to avoid in the first place.

“You are better off doing it correctly the first time than repairing a botched treatment,” Dr. Nicky Srinivasa, a New Jersey-based dentist, tells The Impression. Patients “need a dental professional to take into account all the factors such as periodontal [health], caries risk (cavities), [and] patient-specific anatomy in order to have a successful orthodontic treatment.”

“Imagine moving bones into different positions — you would want a professional to monitor it,” Dr. Srinivas added.

But DIY teeth straightening is not the same thing as remote treatment, or teledentistry.

Dr. Marc Ackerman, director of orthodontics at Boston Children’s Hospital and executive director of the American Teledentistry Association, is sympathetic to the motive behind DIY teeth straightening, even as he stresses how dangerous it is. (According to the University of Nebraska’s College of Dentistry’s teledentistry program, teledentistry is defined as “the use of information technology and telecommunications for dental care, consultation, education, and public awareness.”)

“There’s a psycho-social benefit of having your teeth straightened,” Dr. Ackerman tells The Impression.

The majority of teeth straightening procedures are solely cosmetic, he says, but many people go through the process anyway because straight teeth can open so many doors. If you get your teeth straightened, Dr. Ackerman argues, you may have a better chance of “educability, employability and even marriageability.” And the “[dental and orthodontic] profession has to go further in making it accessible to greater swaths of the population.”

That said, he draws a firm distinction between the purely DIY approaches we’ve seen, with zero involvement from a doctor, and remote treatment, in which “limited tooth straightening” is carried out via invisible aligners that are custom-made to order and sent directly to consumers. In the latter case, treatment is overseen by a licensed dentist or orthodontist. And according to both the ATDA and UNMC’s College of Dentistry, these kinds of approaches are all about improving access to expert care, not replacing it.

It’s abundantly clear that DIY teeth straightening is not safe or advised by professionals. But the good news is that conventional braces, which can sometimes be the most costly method of straightening your teeth, are not the only option out there for those seeking a perfect smile.

“There are many wonderful ways to get straighter teeth with braces, aligner systems, and even retainers with movement built into them,” says Dr. Sletten, who recommends that patients receive guidance from a licensed orthodontist. “I believe a doctor should be advising the patient, from the initial decision on whether treatment will be safe and effective to making the proper recommendations on what treatment would be best for each individual patient.”

For budget-conscious folks, Dr. Srinivasa says he’d advise patients look into payment plans, and encourages people to speak to their doctors about their options.

And by the way: Even some of the DIY YouTubers don’t think rubber bands or hair ties are enough to straighten teeth on their own.

“Eventually,” says Mayela Nieto in the description of her Goody hair bands video, “you should consider braces.” ✧

Kate Bratskeir
Kate Bratskeir is a journalist based in New York. She covers food, health and the environment. Her work has been published in New York Magazine, HuffPost, Travel & Leisure, Health and more.
Let’s get things straight.