Yes, shifting teeth and toothaches during pregnancy are a thing. 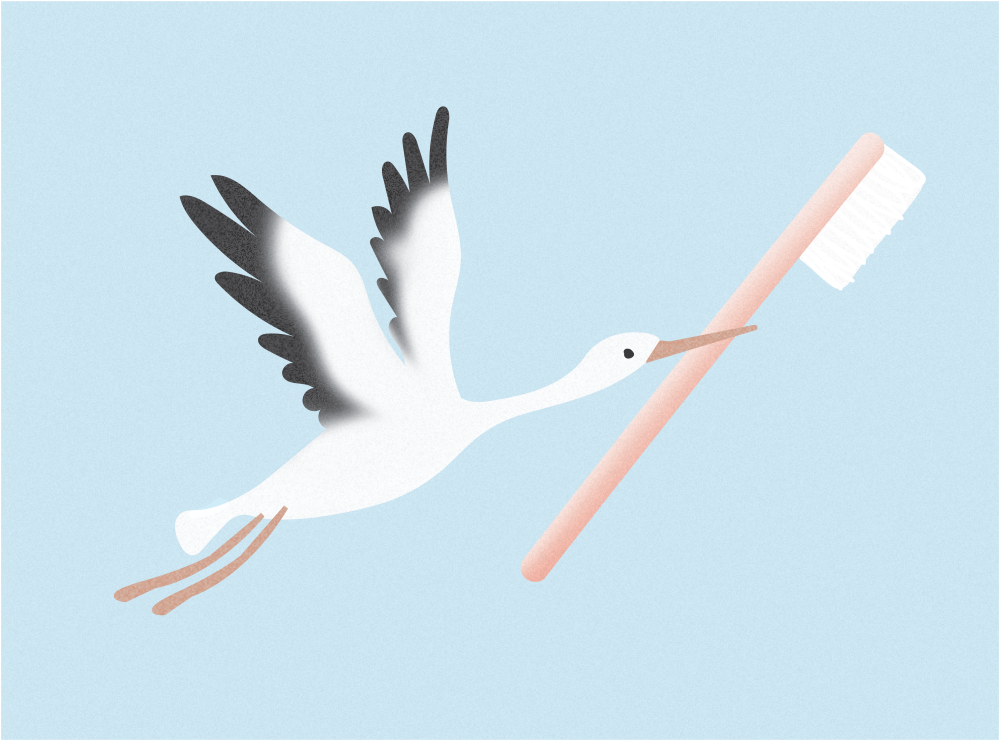 Alexandra Cox, 30, had been wearing braces for two years and was growing frustrated. While she and her dentist saw her teeth straightening within the first few months, her overbite wasn’t correcting. Her orthodontist had already tried using springs and two different kinds of elastics to pull her teeth back along her upper jaw, but nothing was budging.

That all changed in 2018, when the Toronto woman became pregnant. Her overbite closed completely within the first trimester.

“My teeth just started doing what they were supposed to be doing the whole time I had braces,” she tells The Impression.

Cox said her orthodontist attributed the rapid and sudden overbite correction to the change in hormone levels that come with pregnancy.

“He said that sometimes, pregnancy can do some weird things to people’s teeth and bones,” Cox recalled. “Something about having extra fluid and all of those hormones.”

When preparing for a pregnancy, women are often advised on how to anticipate and care for an expanding body, larger breasts, stretch marks and mood swings. But experts say that oral hygiene needs to be part of the prenatal self-care discussion, too. Pregnancy hormone levels can cause unexpected changes in women’s gums and teeth — and if women aren’t seeing a dentist on a regular schedule, these changes could cause a decline in dental health.

This is how pregnancy can cause teeth to shift.

For women like Cox, who was already trying to straighten her teeth, teeth shifting during pregnancy can come as a welcome surprise. But others might find themselves irritated at the change.

Courtney Hoffer, a 23-year-old mother of one in Broken Arrow, Oklahoma, had perfectly straight teeth thanks to braces she had worn as a teen.

But as soon as she became pregnant, she immediately noticed her teeth moving. By the end of the pregnancy, her teeth had moved so much that she could feel that her bite was different.

“I was shocked when I came out of my c-section,” Hoffer tells The Impression. “I could feel that my bite was different, and the way my teeth came together felt weird.”

While the changes are subtle, Hoffer says that people who are close to her have also noticed a difference.

Both Cox and Hoffer’s teeth may have shifted because of a hormone called relaxin, a chemical created by the corpus luteum in the ovaries. When a woman becomes pregnant, the placenta also begins to produce the hormone. Relaxin levels rise to help aid implantation and accommodate a growing pregnancy by preventing uterine contractions and softening joints and ligaments, particularly in the pelvic region.

Then, during birth and the postpartum period, the hormone helps to soften the muscles of the cervix and birth canal, as well as stimulate growth in the mammary glands for breastfeeding. One side effect of increased relaxin throughout the body could be the softening of ligaments everywhere — including the ones that anchor the teeth to the gum and jawbone, explains Dr. Agustin Drubi, an orthodontist based in Miami, Florida.

When these periodontal ligaments relax, teeth become slightly more mobile, said Dr. Drubi. In this state, they’re more susceptible to being shifted out of place by the forces from a woman’s lips and tongue, as well as from her bite when she chews.

In response to shifting teeth, pregnant women may also grind their teeth and clench their jaw more in their sleep. This, in turn, can cause their teeth to shift even more.

“A lot of grinding and clenching is our body’s natural response to our bite changing,” Dr. Drubi said.

As Cox found, women who are already trying to straighten their teeth might find that the process goes by even faster during pregnancy, said Dr. Drubi.

Some women may want to hold off on investing in braces or invisible aligners for their teeth until after pregnancy, when they can be more sure that the changes will stick. But for women who want to both straighten their teeth and conceive in the near future, there isn’t enough evidence to suggest they should do one before the other, Dr. Sadi Kermani, a member of the clinical advisory board at Candid and an orthodontist in private practice in Queens, New York, tells The Impression.

Therefore, it’s a personal decision that should be left to the patient, and depends on how much she’s juggling and what she can commit to at any given moment, Dr. Kermani said.

“There is no contraindication for orthodontic treatment if a patient gets pregnant or if they are pregnant,” he said. “One doesn’t interfere with the other one.”

For some, pregnancy and tooth pain go hand in hand.

In addition to teeth shifting, some women may suffer greater tooth pain while pregnant, usually from already-present dental issues that are exacerbated by pregnancy.

Pregnancy and motherhood has been linked to poor dental health. One analysis of more than 120,000 adults across Europe found that women with three children had an average of four fewer teeth than women with just two children. While it doesn’t demonstrate cause, the study did suggest that pregnancy or motherhood might contribute to making women's oral health worse.

Considering the fact that certain subgroups of pregnant women in the U.S., like those who are young or low-income, aren’t getting the dental care they need, this link is definitely concerning.

Stacie Howell, a 30-year-old mother of a toddler in Elgin, Illinois, found herself in a world of pain during her first pregnancy. First, she noticed that her gums began bleeding a lot. This condition is known as pregnancy gingivitis, which is when the gums around the teeth become inflamed and tend to bleed more during flossing, brushing and dental cleanings.

Then her teeth became extremely sensitive to both hot and cold foods. Finally, the two root canals she had gotten as a teenager, more than a decade earlier, began to throb.

Out of an abundance of caution for her child, Howell’s dentist did not x-ray her mouth. She figured she’d be able to easily fix her teeth problems after pregnancy.

But on the day of her c-section, a chunk of her tooth broke off.

“After I gave birth, it was all downhill,” Howell said. Since she’s given birth, Howell has had two root canals removed, and her dentist has recommended partial dentures for the rest of her remaining molars because they’re in such poor health.

Pregnancy and cavities may go together because constant morning sickness might be causing the protective enamel on teeth to erode, notes the American Dental Association. Other causes could be an increase in consumption of sugary foods or a decline in regular dental hygiene (brushing, flossing, etc.) due to pregnancy-related fatigue.

But Howell, who has had regular dental checkups all her life, said she didn’t have any morning sickness during her pregnancy. And while she may have eaten a few more sweets than usual, she said she cut out sugary drinks completely and drank just water for her entire pregnancy.

Despite these precautions, the difference between her teeth pre- and post- pregnancy was so dramatic that dentists could see it in the x-ray.

Her continuing dental woes have come as a complete shock to Howell. While she had known that pregnancy can change teeth health for some women, she had no idea that it could be so extreme.

“I thought those changes would be minor, like some cavities would develop and need to be filled after birth,” Howell said. “I had no idea that a year and a half after birth, I would have to consider partial dentures.”

Experts say it’s perfectly safe to continue seeing a dentist during pregnancy. According to Dr. Kermani, pregnant women might want to consider scheduling extra cleanings if they find their plaque building up more than usual.

Anna Almendrala
Anna Almendrala is a freelance health reporter based in Los Angeles. Her work has appeared in HuffPost, NBC News, The Guardian and The Daily Beast. She was also the host of a Webby-nominated infertility podcast called IVFML.
Let’s get things straight.