You've probably heard of these "invisible braces." Here are the basics. 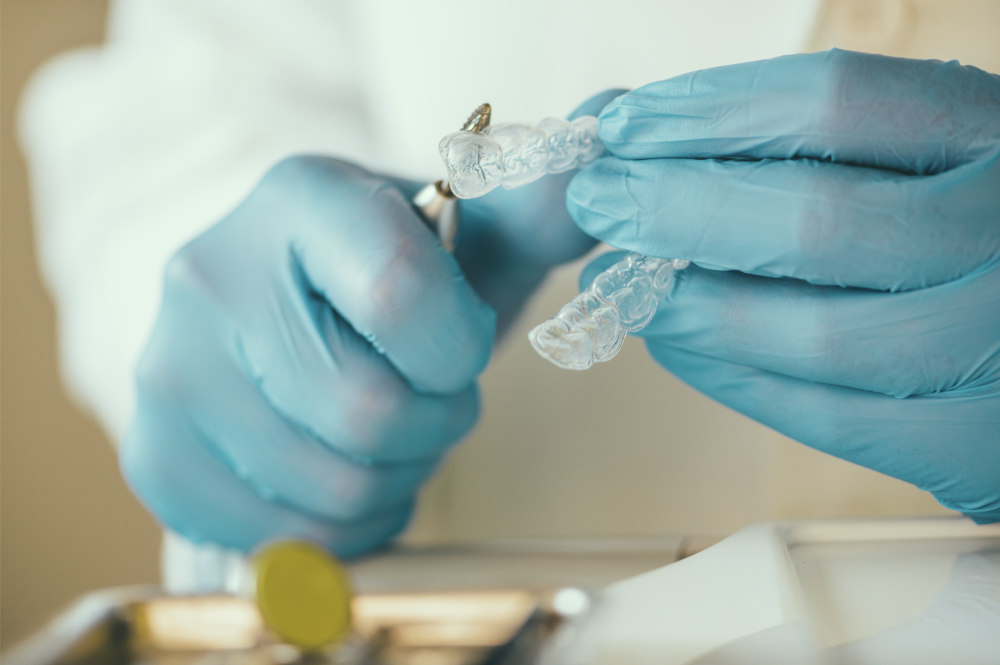 As you research your teeth straightening options, Invisalign is a name that will come up frequently. When people talk about clear aligners, they’ll sometimes use the name Invisalign as shorthand.

While Invisalign is similar to the at-home clear aligners offered by companies like Candid, there are differences in the material, the cost, and how people can get ahold of them.

How does Invisalign work? Invisalign is a type of clear aligner, a removable plastic device made from molds of your teeth that, over time, create pressure on your teeth and engage in the same kind of teeth shifting you see with traditional braces. During a visit with your orthodontist, he or she will either take putty impressions or perform a 3D scan of your teeth to model your mouth and your bite. Using software, your orthodontist will plot a treatment plan to straighten your teeth.

Instead of visiting your orthodontist for tightening the archwire on your braces, he or she will create a new plastic tray as your teeth continue to move, and the number of Invisalign aligners in the treatment is dependent on how much your teeth need to move.

How did Invisalign get started?

Dentists have been using plastic to move teeth since the end of World War 2. In 1945, Dr. Harold Kesling developed the first device to position teeth, but orthodontists were limited in how they could use it, since patients needed to come in for new impressions of their teeth for each visit. The technology didn’t take off until a company called Align Technology, Inc.—the creators of Invisalign—started offering a way to create accurate digital impressions as an alternative to handmade putty impressions.

What is Invisalign made of?

Many clear aligners are made from plastic polymers that are moldable at high temperatures (thermoplastic) such as polyethylene terephthalate glycol-modified (PET-G), polypropylene, polycarbonate (PC), thermoplastic polyurethane (TPU), and ethylene vinyl acetate, among others.

What Invisalign is made of is similar to other clear aligners: a thermoplastic they call SmartTrack.

What is the cost of Invisalign?

The cost for Invisalign will depend on where you are in the country, your orthodontist, how long your treatment lasts, and whether your insurance covers it.

Is Invisalign the same thing as invisible braces?

“Invisible braces” is a term some people use for Invisalign or clear aligners, but Invisalign is not the same thing as braces. You may also hear the phase “invisible braces” referring to lingual braces, but these are metal braces with brackets that attach to the back of your mouth instead of the front to hide their appearance.

Braces are usually devices attached to your teeth that need to be tightened manually by an orthodontist, while clear aligners are removable. The difference between braces and clear aligners are in the complexity of problems they can handle. While both use pressure to move teeth in a desired direction, each are better at types of tooth movements.

For example, braces are better in cases where a tooth needs to be rotated or pulled down, while clear aligners are better at expanding, rounding out, or widening a smile.

What is the difference between Invisalign and Candid?

There are two primary differences between Candid and Invisalign: price and convenience. Invisalign costs anywhere from $3,500 to $8,000, while Candid costs $1,895. And though Invisalign typically requires office visits every few weeks to check in and get your next set of aligners, CandidMonitoring™ allows your orthodontist to review scans you take of your teeth throughout treatment. That means you can scan and share from anywhere. There are two other differences worth calling out. First, Candid only works with orthodontists, while Invisalign providers include both orthodontists and general dentists. (Not sure about the difference? Read this.) Second, Invisalign can treat more complex cases than Candid, because its aligners work with buttons and attachments that allow for a broader range of movements. ✧